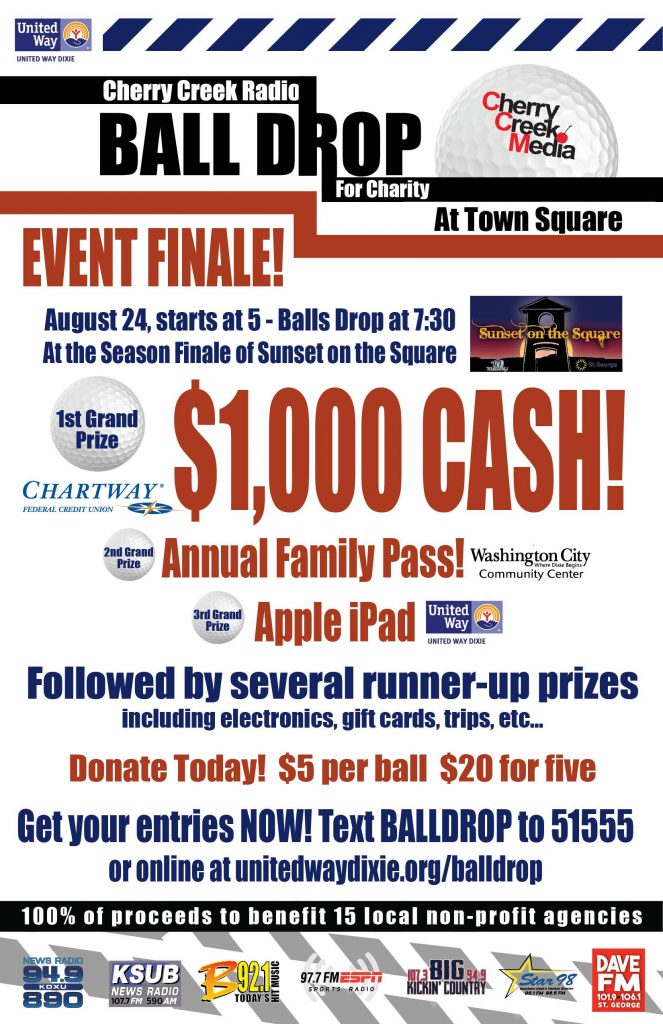 Make a donation for a numbered ball for an opportunity to win several AMAZING PRIZES! 100% of all donations go to 15 local non-profit organizations!

After making a donation your name will automatically be matched to a numbered ball in the bucket. You do not have to be present to win! 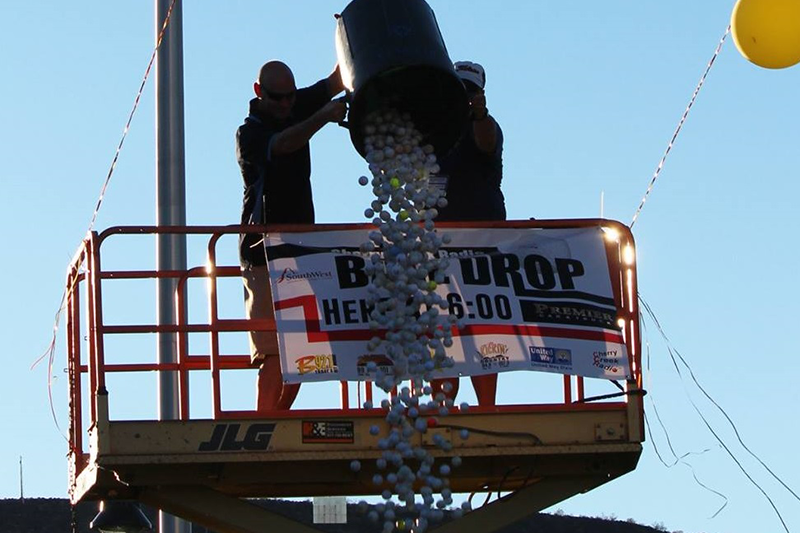 Cherry Creek Radio is excited to once again team up with United Way Dixie and bring you the Ball Drop for Charity Prize Giveaway! Cherry Creek Radio continues to be a long-time supporter of United Way and goes above and beyond in their community support efforts. Cherry Creek Media is Southern Utah’s premier small market radio, events and digital marketing company. Each year we promote incredible events that allow attendees to connect directly with businesses. Cherry Creek Media websites and digital teams provide cutting edge, targeted, turn-key digital programs for our advertising partners. Above all, we’re focused on serving the needs of our market listeners, advertisers and team members.

Tune in to one of Cherry Creek Radio’s popular stations to follow the Ball Drop event, get exclusive prize announcements, an opportunity to win ball drop entries and even more BONUS prizes! 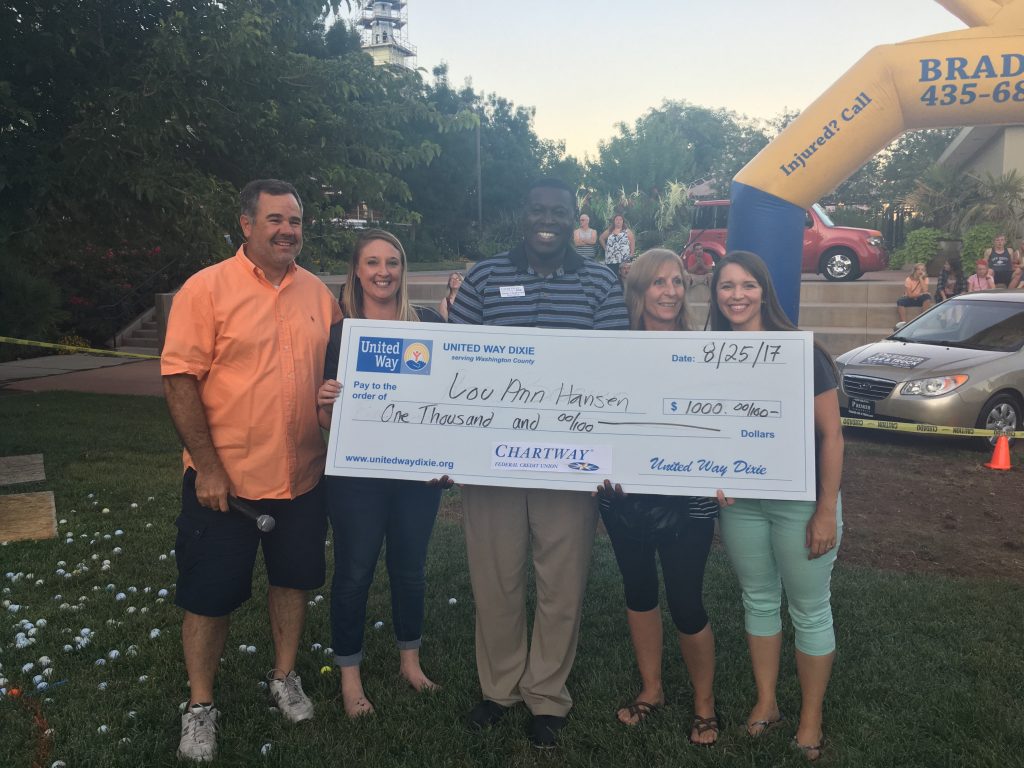 Chartway Federal Credit Union is a dedicated sponsor who has been involved with the Ball Drop for Charity event since its initial creation in 2008. Once again joining the 2017 Ball Drop event, Chartway is excited to give away some big bucks to the Ball Drop grand prize winner’s while helping to raise funds for United Way Dixie in support of the community.

Chartway has been proudly serving its members for more than 50 years. The $2 billion credit union is dedicated to making life more affordable for its nearly 180,000 members through nearly 50 branch locations, with 17 hear in Utah.  As one of the largest credit unions in the country with membership concentrations in Virginia, Utah, and Texas, Chartway is consistently recognized for its financial strength, its high ratings in member satisfaction, and for being an award-winning leader in charitable giving through its We Promise Foundation and CARE Team.

SUNSET ON THE SQUARE 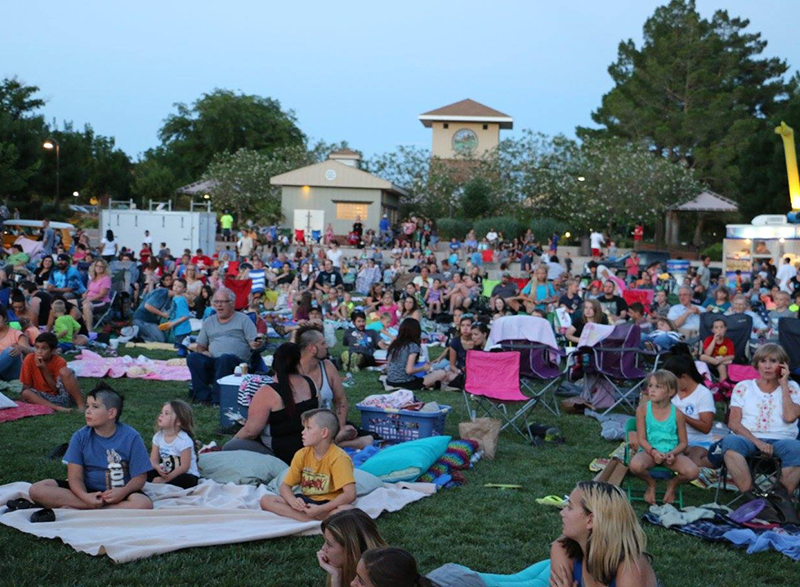 We are honored once again to have the Ball Drop for Charity hosted at the 2017 Season of Sunset on the Square. Sunset on the Square is southern Utah’s original and most loved outdoor summer movie series! This FREE family-based community event features movies under the stars in the heart of St. George at Town Square Park starting the 4th Friday of May, then every 2nd and 4th Friday of the month through

August. Every event features booths, food, face painting, lots of prizes and of course, dancing –all before the movie starts at dusk!! Attend EACH Sunset on the Square movie event for exclusive Ball Drop BONUS prizes! Visit the Ball Drop Booth for more information and your opportunity to win! 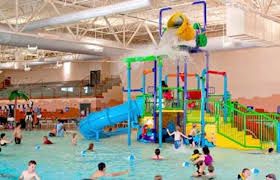 Sponsoring with a SPLASH! The Washington City Community Center has something for everyone, all in one place! This family friendly facility hosts the largest indoor aquatic center in Southern Utah which includes an 8-lane 25-yard competition pool complemented by a 10,174-square foot beach entry leisure pool with a lazy river, 3 story hydro tube slide, play sets for all ages, splash pad, and an enormous 317 gallon dump bucket designed to keep you cool! In addition, the Washington Community Center has a fitness center, rock climbing wall, preschool center, and hosts several community programs and events. Get your Ball Drop entries online for your opportunity to win an ANNUAL FAMILY PASS to the Washington City Community Center and enjoy all the fun the facility has to offer for you and your family!